It’s been two years’ since I have lived in China, and even now certain memories return to me. Memories of me thinking, “What the hell is this?” and not knowing how to quite register the wonder and multitude of questions that China can at times offer. I had started saying to myself, “stopping asking why, there is no answer to why, it only is as it is. There is no why, and no answer, it’s just China.” 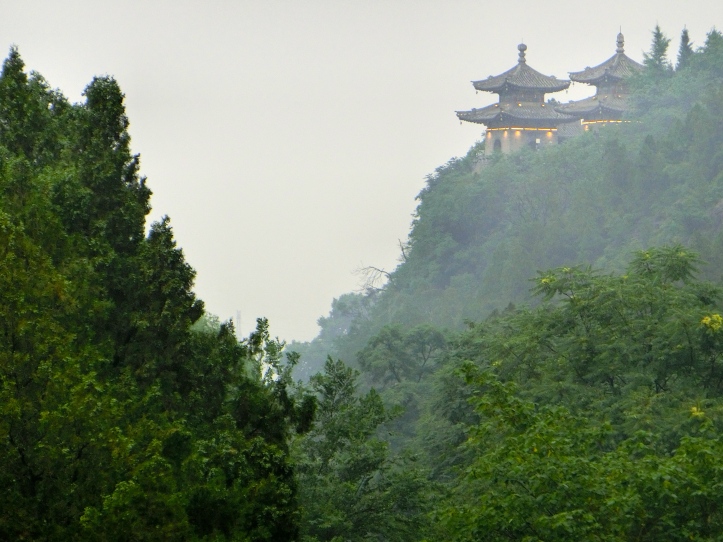 China is naturally a geological and geographical land of amazing beauty (I won’t focus on the horrible pollution that is destroying that beauty, but I’ll still mention it as an aside because it’s important to be reminded that there is a lot to lose). There are landscapes that steal your breath away and fill your heart with awe, but China is also the land of manufactured worlds, and that too is…well…it can leave you speechless. There is as much natural beauty as there is… shall we call it–imitation.It is a matter of opinion on whether you think this is an eyesore and a waste or if you think it’s a brilliant oddity of manmade accidental art, but when you are standing in the middle of one these pretend places you can’t help but be…well…speechless, and oddly admirable of the juxtaposition of China and China’s imitation of other counties and itself. There are ghost cities, and copycat cities: the fake Paris and the fake Venice, for example which are also ghost cities, and there are amusement and theme parks that are just devoted to imitating cities; like Las Vegas in a park with no gambling or strippers or alcohol.

In Zhengzhou, where I had spent one year of my life, the school where I had been working at the time took our classes- the English Language school, No. 42-to a park on the outskirts of the city as part of a class excursion. In the past, I had heard that the school used to offer two class trips a year, and that they had visited actual famous sights and landmarks, but I guess by the time I had arrived they must have lost the budget or decided not to spend so much on the teachers and students- so we got fake China. I never learned the name of the park in Chinese or translated into English, and believe me I had tried. I searched the internet but couldn’t find any information on this mystery park visited by Chinese students and couples having their wedding pictures taken. The closest I found was the Century Park where all the students excitedly thought we were going until our bus passed it by and took us to a second tier theme park. There were audible groans of disappointment.

Henan, the province of Zhengzhou, is a very important province in the history and the civilization of China. In fact, out of the eight ancient capitals of China four of them have been located in Henan. Zhengzhou was recently added to that list due to the discovery of an ancient dynasty perhaps the oldest of all the dynasties, the Shang dynasty (1558 b.c.- 1046 b.c.). When in Zhengzhou there is no remanence of the Shang’s presence except for a portion of an ancient settlement wall that looks today like a giant wall of dirt. You can find this wall in the eastern part of the city. The other Capital cities were once located in Luoyang, Kaifeng, and Anyang (where the oldest collection of Chinese writing was found written on ox bones and turtle shells. Evidence of the Shang dynasty had also been found in Anyang). Henan is not only the birthplace of the great Chinese dynasties,  but also Zen Buddhism, and Kung Fu. In this one province you can visit the oldest civilizations of China, and the explore the historical birthplaces of China’s societal foundations many of which still hold today, even many events leading to China’s communism were formed in Henan. In Luoyang there are the grottos an amazing religious site with over 100,000 carvings and status of Buddhist images. In Dengfeng and Shaolin are the schools of Kung Fu, and in Kaifeng the most famous judge in the history of China, Boa Zheng, had once resided. He was also called justice Bao because he was honest and upright, and even today he is the symbol of justice. A living history lesson at can be at your finger tips, but if you can’t get out of the city you can visit these ancient landmarks in one city park in Zhengzhou.

I wasn’t really certain what to expect, and since at this point I had already lived in China for close to a year, I knew to expect the unexpected. All that could really be explained to me was that we were going to a park. I’ve decided to name it The Park of Great Things In Henan and Beyond, because every city and historical monument was represented in replica, not to size, for the Chinese tourists to enjoy. I say Chinese because this isn’t a park that many foreigner travelers may find themselves. Not many foreign travelers will even find themselves in Zhengzhou for more than a day. Most people come to Zhengzhou only to change trains unless they are actually living in the city. I remember a person once saying to me, “Zhengzhou? Oh yeah, I think I was there, in fact I got my wallet stolen in the Zhengzhou train station.”

Can’t visit Luoyang? No matter you can find the Grottoes here. Don’t have time to see the Iron Pagoda in Kaifeng? It’s here. You’ll never find yourself in Anyang? You guessed it, it’s here too. In fact, if you want you can see a part of the Great Wall here too. If you get tired of China you don’t ever have to leave the park because around the corner you will find Egypt right next to Greece, (of course) and all of Africa encompassed in two statues, and right next to Africa you’ll find Australia, exactly where you’d imagine it to be. The main highlights of the park were physically being there and kind of wondering why; discovering the pretty offensive perceptions of Africa (or maybe some island places?), the aged look of the park when it was only a couple of years old, having a water gun war on paddle boats, a Chinese man assuming I was a Christian because I am white/foreign and handing me his Bible to hold as he bowed to me several times, watching the multitude of wedding photography, skipping rocks with my students on a fake lake that had a water show, and spending time with students and teachers in a place that would and can only be experienced once in my entire life.

If you want to see a few more photos from this theme park you can find them on my blog Simple.