Stopping to Visit the Peonies of Luoyang

In Luoyang every year from mid-April to mid-May when the peonies are in full bloom the city celebrates the Peony Festival. There are many peony gardens to visit in the ancient city that was once the capital of China. The most famous and main garden is the Luoyang International Peony Garden. It is one of the oldest peony gardens in all of China.

I did not go to this garden. I couldn’t tell you which garden I visited. All I can say is that I was in Luoyang during the Peony Festival.

It was May of 2014, the morning after I had just hiked Mt. Hua with my friend Sean, and his friend Xiang Kai. We had hiked for 14 hours the night before, ill prepared and with little experience, on one of the most dangerous mountains . I’m talking about myself as far as the experience hiker part goes, but I didn’t think Sean was an expert, and I knew Xiang Kai had not hiked many mountains. Hiking in China is different than hiking in the U.S. In the U.S. hiking is a solitary experience. You climb with one other person maybe a few people and perhaps you cross the path of another hiker or two, but mainly it is you and the wild, and the animals who ignore or watch you. In China (or at least on Mt. Song, and Mt. Hua, and the other mountain I hiked) there are no animals only hoards of people. I never saw any animals, not a squirrel or a lizard only a bird or two. I’d never seen so many people on a mountain at the same time except at a ski resort during a holiday. The day we hiked was rainy and cloudy so it wasn’t nearly as crowded as it could have been. Even on a bad weather weekend there will still be hundreds of people climbing. It doesn’t matter if you go early in the morning or late at night it’s still crowded. The key would be to go off season during the middle of the week and definitely not during any vacations or weekends, but when you’re a teacher you have the same schedule as all of China, so either you don’t go at all, or you experience it like all of China-crowded. I had decided that day that I would one day return to China, but not to work only to travel so that I could plan my visits to ancient sights and geological wonders on the off times, but those were and are daydreams for other days. 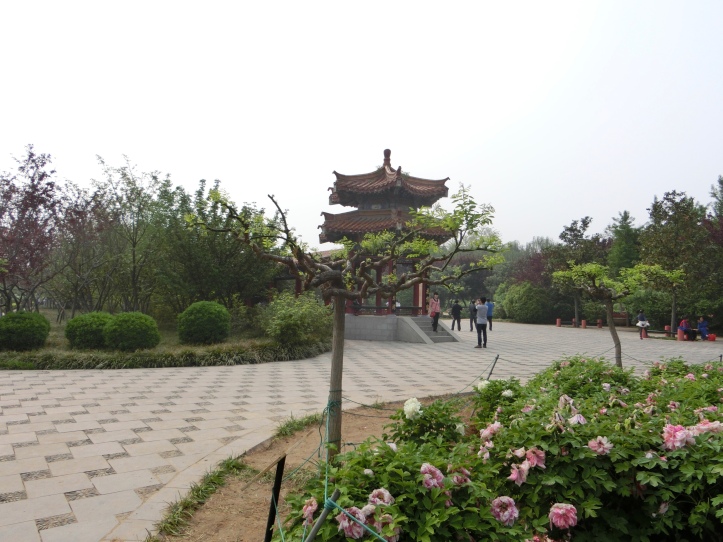 It was Sean’s idea that we stop in Luoyang to attend the Peony festival. Xiang Kai had to work that evening so he would not be able to join us. I was exhausted. My body felt worn and broken and I was irritable and still fuming about Sean’s comment that I was too old to climb a mountain. Ignorant boy, my mind ruminated on his off handed remark about my age that only an ignorant boy would make. I had hoped his feet were still suffering from his badly chosen climbing shoes. The wise thing for me to do would have been to go home, eat something nutritious, and then go to bed, but when Sean made the spontaneous suggestion I felt I needed to go. Life is an unexpected ride and you never know when it will stop and where it will start and many times an opportunity is a one time only opportunity. When would I be in China again for the Peony Festival? I had already decided not to renew my contract. I had already decided to leave China. I could tell myself I would be back, but I didn’t know for certain. Some days I hated China, and would think, never again- never again will I return to this country. It had been a hard year for me, and not all China’s fault, but I was in China when my mother died. It was in China when the most important person in my life left this world. My worst fear had been awakened. How many times had she told me that she would not be able to live without me? How many times had I promised I would never let her die alone? How many times had I told myself I would return and take care of her? China was to be my last experience, my last galavant as an explorer of this world living a life style that I didn’t believe was meant for me. I had never imagined I would ever be able to travel, that I would have lived in foreign countries. I was an accidental traveler and it was time to return to my “real life” whatever that was meant to be. I was going to go back to California and going to care for my mother. I didn’t want to live in Chico because there wasn’t anything for me there, but she was there and she needed me. I had been too slow, and too selfish, and I had failed her. I failed as a daughter. I suffered through that guilt alone in a foreign country, a country so foreign from my own that even our process of grieving was different. My mother died alone, and I had not been there to help her.  My anger, and my guilt, and my pain all manifested into my frustrations about a country that was so incredibly different from my own. I did have Sean though, my friend with his choppy english and his oh- so Chinese ways of thinking. Sean my friend who stayed by my side the best he could and tried to show me the things he loved most about his country. Sean was an impatient Chinese teacher, and impatient about many things, and he expressed much frustration about where he was in his life, but through it all he taught me a lot about patience and how to deal with frustration and how to accept that where you are is where you are, but that change is always around the corner whether you want it or not. Uncertainty is the essential part of this life experience and in the uncertainty lies the choices. 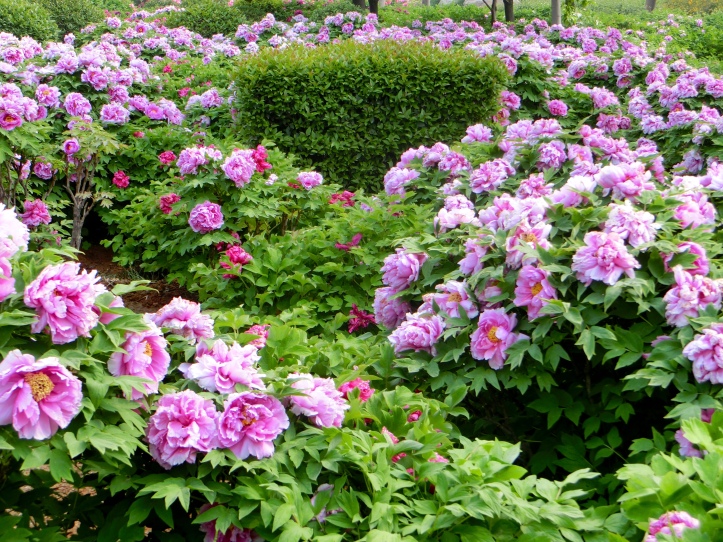 This was life, and I was still living, and I had to take the opportunities as they came no matter how much my body hurt, and how aggravated I had felt when would I have another chance? I agreed to stop in Luoyang and to see the Peonies.

My body was not in full agreement with my mind or my heart. As we wandered from the train station to the nearest garden my body began to pull rank and my brain switched sides and together they caused me to grumble and slouch and move among the flowers like an impetuous child snapping bored pictures here and there waiting to stop to take a nap. Once in the garden all I really wanted to do was lie down in a bed of purple peonies among all the butterflies and drift off into a deep sleep. I did my best to not unleash my grumpiness on Sean, and I allowed him to tell me stories about the history of China and the symbolism of the flowers. He was gracious enough to understand that I was not feeling my best, yet still seemed to enjoy my company. In the end I knew I was not fully present in the moment, and that my body and exhaustion had won this battle, but simultaneously I was aware of the value that the day, and the weekend held. 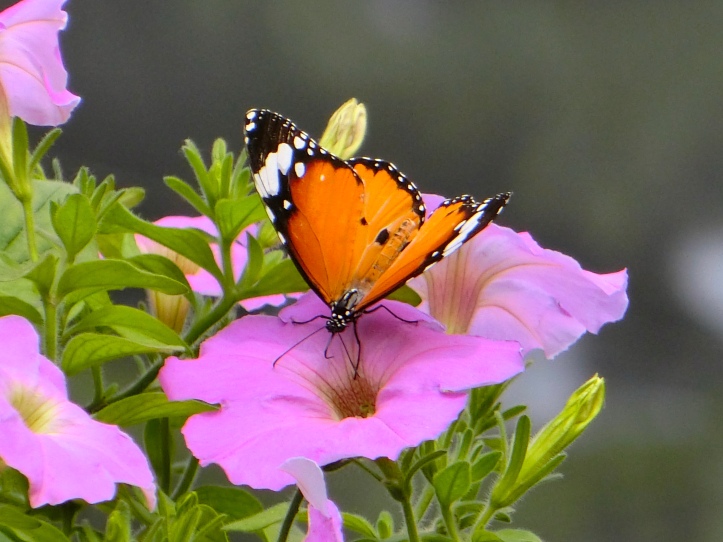 We are gifted moments in life and too often they only come once. Some are large and noticeable, but most are small and subtle and too easily we miss them. We don’t take the chance to strike up a conversation with a stranger or take the path that no one is following. I know no other person from my life, as of yet, that has hiked a sacred mountain with friends from China, and eaten prepackaged chicken feet and teriyaki marinated boiled eggs, and then stopped off at a Peony festival that had been celebrated for two thousand years. When I do meet someone who has experienced this it won’t be the same as I had experienced it. We all experience our lives differently, we are similar, but still we are each unique.

I didn’t get to enjoy the Peonies to the fullest of my capacity, and I wasn’t able to collect the memories of the day here in a nice well packaged form to share with others as to the best way to see the Peonies. I didn’t have to because no matter where I go in the world I am going to be me. That means me in a bad mood, me in a good mood, me irrational and me aware. Me wonderful and me not wonderful. My goal is of course to lean my life more towards the awareness and wonderful, and to be in the presence of my life and embrace the moments. Some days work and some days don’t regardless if I am climbing a sacred mountain in China or washing laundry in a laundry mat in Portland, Oregon. Years later I can think back on my hike and my visit to an ancient garden with my friend from China, and look at the pictures I took of flowers that had been planted and cultivated for two thousand years. I can accept the fact that flowers and gardens are not top on my bucket list, and I can say to myself, I did that, and I went there, and I was in a bitchy, irritable, and grumpy ass mood, but I was there. I took that moment and received all that it offered me even if the gratitude came a week after some solid rest.