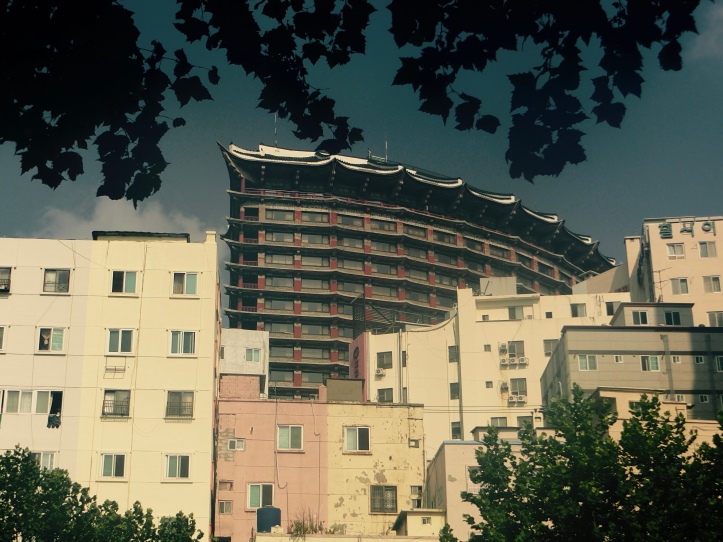 The day is August 9th, and I am sitting in my hotel room to avoid the sweltering heat in Busan. A heat that I am not accustomed to as of yet. I’m not certain one truly acclimates fully to heat and humidity, but people do live in it.

My first days in Busan began with angst. I had flown from Portland to San Francisco on Virgin America, and then from SFO to Beijing to Busan on Air China. Two transfers, two airlines, three security checks (China’s was the toughest) and because of the time difference it seemed like it took me two days. I had left on the 4th and I arrived on the 6th. What happened to the 5th? But, more importantly, what happened to my luggage? Somewhere in all of that transferring my luggage was lost. I wasn’t calm about it, but also there isn’t much I can do. It felt like a big loss, and not the best way to arrive in my new foreign city.

I’ve moved to Busan; for at least a year, and I was feeling apprehensive about the move. I can’t say why I felt or feel apprehensive. This will be my third time moving out of the U.S. on some crazy adventure that I don’t plan well. It’s the fifth foreign country I’ve moved to, and my second Asian city to live in. One would think that by now I would feel more comfortable with the whole affair, but apparently I don’t. Apparently, I have a hard time doing it, but by the time I return to the states, I no longer remember my trepidations, and I do the damn thing all over again. I’ve never lost luggage before though so it is an added challenge. I tell myself, as my friends also tell me, “I have to believe things will work out. It will come back to me.” I try to put my faith in this thinking, but it didn’t stop me from crying my eyes out thinking about certain things I had in the case. That awesome jacket. My shoes; the one’s I loved. My brand new external hard drive that I had meant to put in my carry on, but forgot to. Then of course, my travel journal that is filled with pictures of my mom and home- it is something that gives me peace. That’s what really hurts. That can’t be replaced. So, I cried my first evening in Busan. I cried because my luggage was lost, and I cried because as per-usual, I don’t know what I’m doing nor do I know why I decided to go this route, and I’m afraid. That’s all normal for me. The thing is, I do know what I’m doing. I know more now this time then ever, but it doesn’t stop me from doubting myself or my choices. That too seems to be normal.

A friend met me at the airport. I was very grateful. I had felt uneasy on my arrival, what, with exhaustion, loss of stuff, and second-guessing my life choices. It was good to have a familiar face greet me in an unfamiliar place. Nikki, who I had met at Angloville in Poland a little over a year ago, guided me onto the subway and into the city where I am am being put up in a hotel near Nampo district. I’m to be in this hotel during my training period for my school. It’s about two weeks. I am not officially hired until I successfully complete the training. So who knows, maybe I will be back in the U.S. in two weeks more broke and in debt than ever, and with no clothes. Let’s hope not. 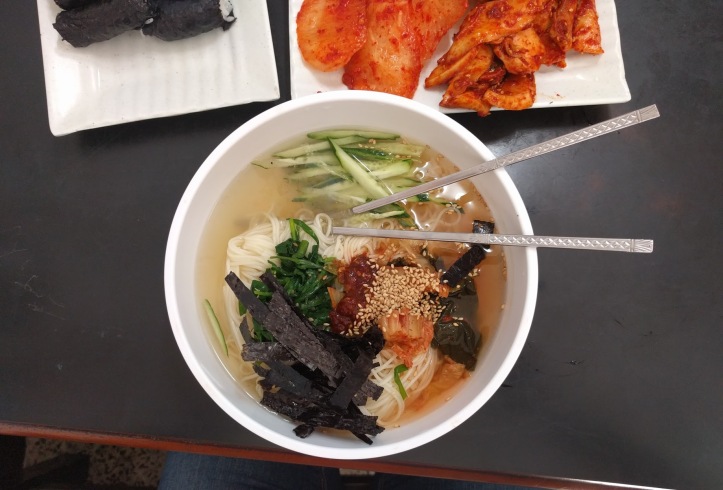 Nikki and I wander a bit in the heat till we found a little restaurant where we ate cold noodle soup and kimchi and other delightful Korean snacks. As we walked around in the district of my new Asian city, I couldn’t help but compare Busan to Zhengzhou. Asian cities are so different from European cities as they are different from American or New World cities. The smells are different. The architecture, and the urban planning is all different. I don’t know a lot about Busan yet, but I believe a lot of it was destroyed in the Korean War so much of the urban planning is post- 1960’s. Also the land scape is hilly so that creates a different type of planning. There are some similarities to Zhengzhou in one particular smell and in the people, but they are only subtle similarities, and there were differences in what seemed familiar. Immediately, I noticed that it isn’t nearly as crowded here. In fact, the side streets were often empty. When it comes to the hustle and bustle of the subway people seem to be more polite here. There is some pushing, but nothing compared to China. If someone pushes past you they seem to be from the older generation and not to aggressive about it. In China, I found it to be very aggressive and all ages. I felt a bit like there was a sense of panic in Zhengzhou like a person needed to push everyone out of the way or they’d be left behind. Plus, in China there was the whole cutting in line (which really annoyed me) which I haven’t encountered here at least not in my one day. There was a similar smell. It wasn’t all over or as potent as in Zhengzhou, but it was the same smell. It is a terrible sewer smell that is sharp and pungent. It was very prominent in Zhengzhou, but I would only occasionally catch a whiff of the smell in some alleyways in Busan. Sewage actually smells different in China and Korea (in the two places I’ve been) then in American cities. It all smells like shit and bad, but it also has a different kind of bad. A sour kind of bad. Oddly, I find that fascinating. I imagine it is what we eat and how we live. 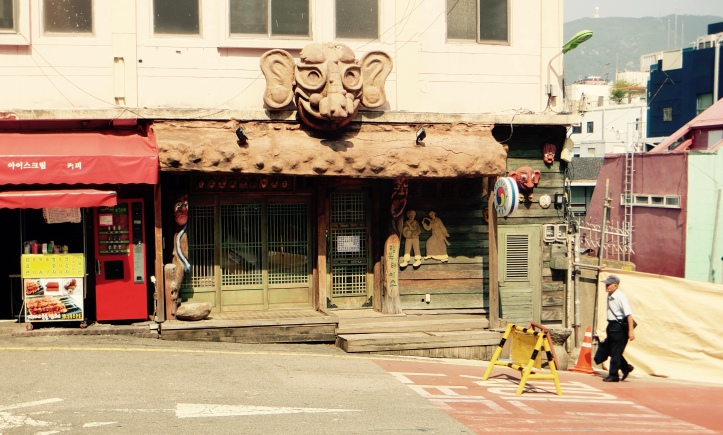 After Nikki left I returned to my room, and cried a little. Then stared out at my view. I do have a nice view of the port from my window. I am far from the popular beaches but I can see the bridge that lights up like a rainbow bridge at night and connects the Yeongdo-gu island to the mainland. I can also see Mt. Bongnaesan and all the lights from whatever and whomever is living over there. Looking out the window calmed me some, and my exhaustion overwhelmed me. I tried to read a bit before going to sleep, but I was out before 9 p.m. 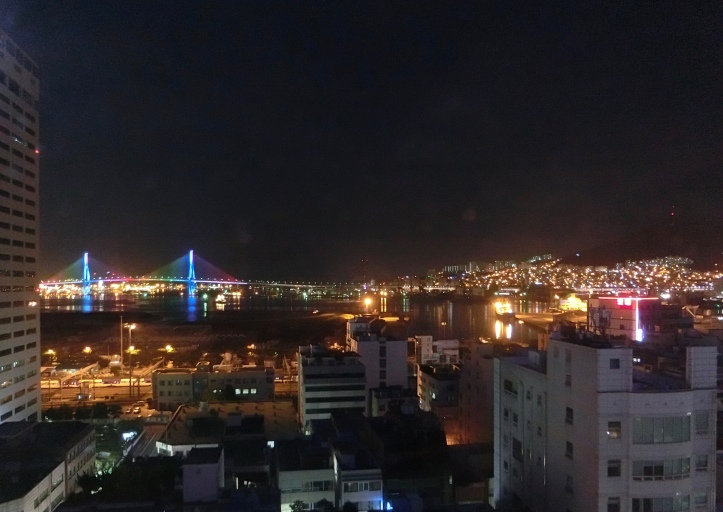 In the morning after struggling to contact Virgin America, and not getting much help via chat (I have no phone right now so it adds more to the difficulty) I had another cry, and then told myself, I needed to get it together. I’m here. There’s not much I can do but hope. I can cry all I want, but it isn’t making anything better. Although, it did feel pretty good to cry. I ate the complementary breakfast offered in the hotel. It was kimchi, and rice, and some quail eggs. There was also some cakes that I think may have been fish, and a finely grated white cabbage salad. It wasn’t amazing, but it was fine. I am already a big fan of kimchi. After eating, I was determined to try and explore. I wandered a bit through some streets until I found my way to Yongdusan park. 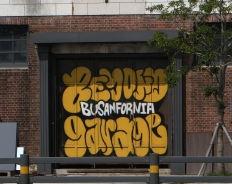 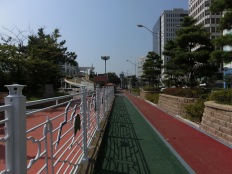 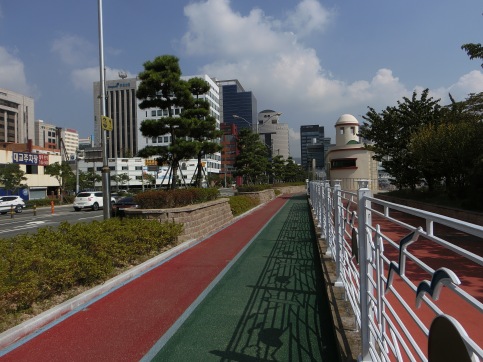 Immediately upon stepping under the trees of the park I was surround by a cacophony of buzzing and caterwauling. I can only guess that it was insects. For a moment, I had thought the caterwaul was coming from strange birds, but the consistency and pattern of repetition and tone matched with the other buzzing which I knew to be beetles. So I’ve concluded, that indeed, there are some monstrous bugs living in the trees above us. There were subtle things that captured me as I wandered melting in the humidity that was already high by 10 am. The insects that I could hear, but not see. The bark of some of the trees that seemed to look as if it was melting, and the soft shapely pinecones that sat delicately side by side in a tree as if they were siblings. They are siblings. I enjoyed the Busan tower, and the various Korean design of some of the buildings, but really it was the nature in the park that was the most interesting part. I took some photos, and as I did a man offered to take my picture. I’m sure he wanted money for it, because he was trying to pose me. I’ve never been all that comfortable with strangers taking my picture- especially when they offer it. I don’t think I photograph all that well so I’m pretty awkward about the whole affair. Still, he took them and I walked away. I began to feel damaged by the heat and I gave up my exploration. I felt a little better, and I was glad I got myself away from myself. 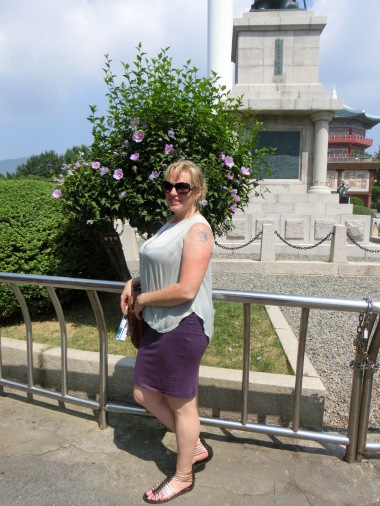 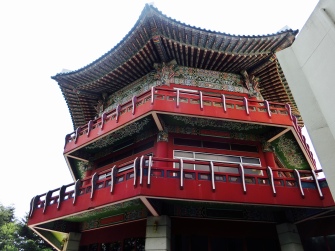 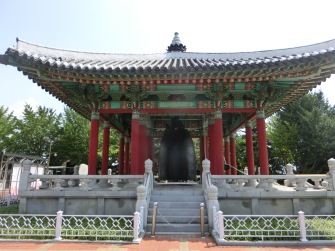 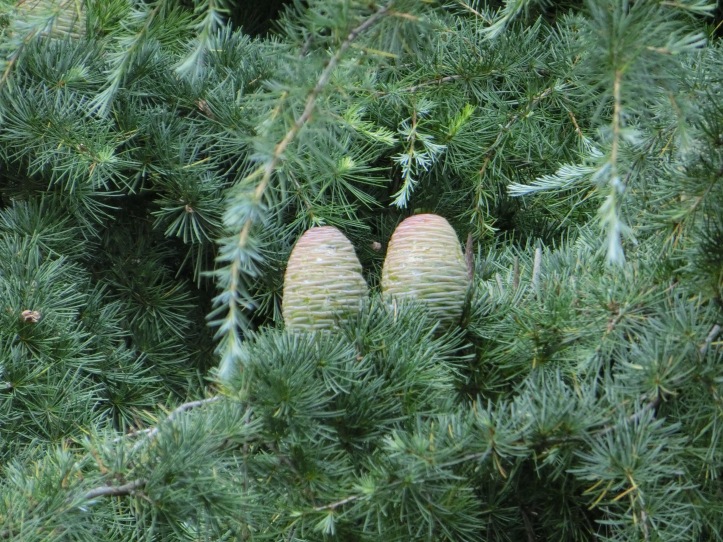 As I wandered back to the hotel I discovered art and murals in various alleyways and I saw a numerous amount of coffee houses. I had thought I would be giving up coffee for a year, but it appears like Busan has more coffee places in just this neighborhood than all of the city of Portland. It is good coffee too.